WytchWood syrup starts with the sap from Maple trees grown in central Vermont. It is then boiled and carefully infused with organic botanicals, fruits, flowers to create our bottle of maple magick. Hand wax-sealed and blessed, this is unlike anything you have ever experienced. Each and every bottle is represented by a God, Goddess, Pagan celebration or folklore icon.

The goddess representing our lavender and lemon maple syrup flavor is Circe. In Greek mythology, she is the goddess of magick. She is well versed in potions & healing and uses her knowledge against her enemies by turning them into wild animals. Interesting fact is that the earliest mention of a wand was when Homer's 'The Odyssey' described when Circe turned Odysseus’s men into pigs. She is the daughter of the sun god, Helios and and of the ocean nymph Perse. However, there is some speculation that her mother was Hecate, a goddess of sorcery. She has blended the calming herb of lavender with a zest of fresh lemon to create the perfect summer syrup.

This syrup is great on or with:
Pancakes, granola, desserts, ice cream, yogurt, lemonade, cocktails.

This is my favorite syrup flavor so far! It's perfect for tea, pancakes, and lemonade. I am ordering another bottle!

This is my favorite syrup. I am sad that it is only at certain times of the year, because my pancakes don't taste the same without it. Perfect blend of floral with a touch of lemon that balance each other. If you haven't tried it, you should! I would imagine this is wonderful in drinks too but i haven't gotten to try that yet. 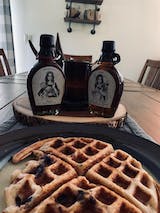 This is my favorite flavor so far!

Circe syrup...its like stirring a tiny cauldron coffee pot of sweet lavender & lemon shortbread! Ooooo, I bet it would work in the recipe:) Thank you again Wytchwood for another lovely product, blessings...aho!

My favorite flavor. Subtle lavender but stronger lemon flavors. Favorite way to have is drizzled on my toasted morning bagel with a sprinkle of coarse Himalayan salt. Yum

This Circe syrup is far more flavorful than I could have imagined! I was guessing that it would be my favorite but I've shocklingly found it the most difficult syrup to incorporate in my food, out of the summer flavors, because of it's lovely (but intense flavor.) I barely taste any maple as the lavender and lemon shine right through! I've used this mostly as a sweetener for lemonade and as a drizzle on sweet breads.

I’m really happy I treated myself to this flavor! Yum!

Since receiving my syrups, I have tried on pancakes and tea. From those couple of treats alone, I can 100% confirm that they were delicious. Great flavors (noticeable without being overpowering) and really added to the dish. 10/10