I love Brigid: British Rhubarb & Ginger. The day I got the package I had a cold and put a little bit in my tea. Cheered me right up and made me feel so much better!

A
Alexa Ayer
Sweet with a little spice!

The ginger is PERFECT in this! I love mixing it into teas and glazes for fruity muffins 💖

I really loved this syrup, especially with my favorite Vanilla Cardamom French Toast! The rhubarb and ginger flavors were soft and complimentary, and lended the perfect blend of tart and zest to this syrup.

From the packaging to the flavor….it was just marvelous to receive. The syrup is delicious. Just the right blend of ingredients for a very unique flavor! Thank you!!! Adrienne

I am a huge fan of both rhubarb and ginger so I was already very excited to try this maple syrup. I decided to pour some over my oat milk ice cream and it did not disappoint! Absolutely blissful! I am thinking about using it in a homemade salad dressing to top some arugula that I grow in my yard! Spicy and sweet deliciousness!

What a delightful surprise this rhubarb and ginger blend is !!

Such a good flavor! There's a perfect balance between the rhubarb and ginger. You get that yummy ginger flavor, but it's not overwhelming like some ginger-infused things are. Absolutely delicious on waffles, but I think it would be great incorporated into a cocktail too!

L
LizHal
Fit for a goddess 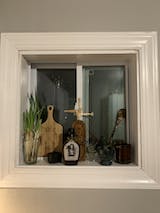