Just in time for Valentines Day, we introduce to you our Rose & Cardamom flavor as the Greek Goddess of Beauty, Love & Eternal Youth - Aphrodite!

Aphrodite, ancient Greek goddess of sexual love and beauty, identified with Venus by the Romans. The Greek word aphros means “foam,” and Hesiod relates in his Theogony that Aphrodite was born from the white foam produced by the severed genitals of the Titan Uranus, after his son Cronus threw them into the sea.

Aphrodite was, in fact, widely worshipped as a goddess of the sea and of seafaring; she was also honored as a goddess of war, especially at Sparta, Thebes, Cyprus, and other places. However, she was known primarily as a goddess of love and fertility and even occasionally presided over marriage.

WytchWood syrup starts with the sap from maple trees grown in central Vermont. The sap is then boiled in the Spring and infused to create a delicious rose from Europe and exotic cardamom. Each bottle is hand wax-sealed, blessed and unlike anything you have ever experienced. Each and every bottle is represented by a God, Goddess, Pagan Sabbath or Folklore Icon. They are designed as libations but can be used for anything Kitchen Witch related as well.

You can really smell and taste the rose and cardamom in this. Neither is overwhelming. It is a perfect blend. I use this is my coffee and it is perfect!!!!

This delicate syrup is one of my favorites!!!
Soooo yummy!!

I love this exotic sweet treat that makes feel like I'm the Princess of Persia. Great on French Toast, ice cream and flavoring my water. Well balanced Rose and Cardamom balance. Is absolutely delicious on anything & everything. This is my other favorite!

I LOVE this stuff! I love rose flavored anything but sadly there seems to be a shortage of rose flavoring and rose flavored products out there. So when I saw WytchWood had a rose and cardamon maple syrup, you can imagine my excitement! And it's absolutely DELICIOUS!!!!! My favorite thing to add it to is hot chocolate!

My cappuccino has never been more magical OR delicious !

Oh man, when I first saw this flavour all I could think was “that would be amazing for baklava” and you know what? I was right! It was absolutely stunning and even my non-vegan friends couldn’t stop eating it! I’m sure it’s great for other things but all I can think of is Middle Eastern treats (they are my favorites). I want to try it in Turkish Delight and Nan-e Nokhodchi next! 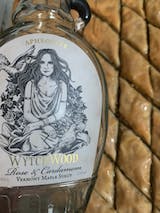 Such an amazing flavor. Subtle but good. Looking forward to trying other flavors.

These are two of my favorite flavors for baking, but they can be very tricky to use well. It's is so easy to have a perfumey rose flavor, or overly potent cardamom. But not with this syrup! They are perfectly balanced and complementary to each other.

First of all I looove the packaging and Goddess names on the products. The Aphrodite maple syrup is yummy and I can definitely taste the rose and cardamom just right and not over powering. I’m excited to use the syrup on other things aside from pancakes, waffles and fruits.