This syrup is fantastic for cooking with and has a very definite rum flavor. I used it to sweeten cherry pie filling for chocolate cherry hand pies with deliciously fantastic results! It is also really great as a topping on bread pudding! 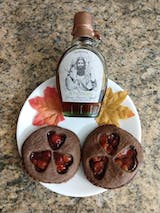 Wow! From the amazing packaging to the flavor itself, we could not be happier! My boyfriend helped pick out this flavor and I’m glad he did! It has the delicious taste of real maple syrup with just the right amount of rum flavor. It paired really well with banana walnut pancakes and was also a nice treat added into coffee. My only complaint is that it’s not a never ending bottle! Can’t wait to try more flavors! 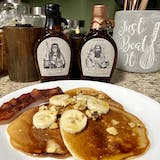 Was the best treat for mixed drinks, ice cream, and I even mixed some in my coffee !!!! So soooooo good !

I'm not a huge fan of rum, but once I tasted this syrup I wanted to try it on everything!

The rum flavor is clear and pungent, but is backed by a solid earthy sweetness from the high quality maple syrup.

I highly recommend using it as a sweetener in homemade ice cream, or to make a rum maple frosting for a deliciously decadent chocolate layer cake. Add a splash of this in some spiced apple tea or as a sweetener in an apple pie. Or give it as a gift to your mom who loves rum but can't handle her liquor :)

This maple syrup is amazing! The rum flavor is delicious and enhances the flavor of whatever its made with,