I purchased multiple syrups and some other products. They’re all wonderfully packaged and high quality. The most delicious syrups I’ve had, and I love the unique flavor options.

Odin is one of my favorite gods from the Norse pantheon and I love bourbon-barrel flavor in my sweets so of course I had to give this a try! Tried it first in coffee and you immediately get a bang of bourbon off it, although it is not overpowering and is definitely subtle. Tried it next on some stuffed French toast and it was the perfectly elevated companion to the sweet and creamy filling. I think this is a beautiful tribute to the Allfather, and he would thoroughly enjoy it. I CANNOT wait to use this in Nawlins-style bread pudding - there is no way to go wrong with that combo! 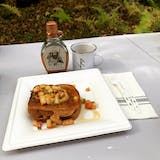 I absolutely LOVE the flavor of this Bourbon Barrel-Aged syrup! This is what I go to for a special little treat. This is part of my "self-care" these days!

This is syrup is so yummy. It is a nice twist to a traditional maple syrup.

The packages were thoughtfully and ethically wrapped. The gifts in the Hekate box were amazing and I can’t wait to start using the syrup. It will be hard not to have the whole bottle at once!

In my years of running distance, I have tired of pasta and have moved to pancakes and waffles for my pre and post run snacks. The flavor of Odin is not overpowering yet it so full of flavor. Please don't let the amazing bourbon barrel smell turn you away - it just adds to the full experience when you open the bottle. Highly recommend if you're looking for a not too sweet syrup with rich taste. (Can't wait to mix in post- race cocktails!)

Literally the ONLY reason I’m giving this 4 instead of 5 stars is because I’m not an alcohol person. I wasn’t born with the appreciation of wine and spirits. HOWEVER, I took a chance on this and I will admit that it is so satisfying. It’s not too harsh for my palette and strong enough for any bourbon aficionado to love. I had it on a Belgian waffle with bananas and whipped cream!

Love this so much! It’s been in coffee, tea, on ice cream, on ham, used as a sweetener for breakfasts...
definitely recommend!!! It arrived packed safely and in recycled materials (which I really appreciate). The bottle itself is beautiful. So much info on the Idin and the illustration is amazing.

The bourbon isn’t too strong. It’s a hint but not too weak either. I feel like the Goldilocks of reviews because it’s genuinely just right! I can’t wait to pick up more products! ✨🤍

My syrup arrived promptly in a beautiful brown box and neat packaging tape. Inside there was a coupon for my next purchase and a sticker. My Odin syrup bottle was seal with beautiful wax. I love the story of Odin on the back of the bottle and the labeling is gorgeous! I made some corn fritters and used the syrup for dipping. Damn this syrup is good. You can really taste the bourbon. The bourbon taste isn’t too weak or too strong, it’s perfect! Can’t wait to find new ways to use it. Thanks a bunch! Glad I found you