WytchWood syrup starts with the sap from maple trees grown in central Vermont. The sap is then boiled in the Spring and infused with organic fig and finished with a vanilla bean. A sweet, creamy and fruity syrup. Each bottle is hand wax-sealed, blessed and unlike anything you have ever experienced. Each and every bottle is represented by a God, Goddess, Pagan celebration or folklore icon.

Freya is one of the preeminent goddesses in Norse mythology. She’s a member of the Vanir tribe of deities, but became an honorary member of the Aesir gods after the Aesir-Vanir War. The word for “Friday” in Germanic languages is named after Frija,the Proto-Germanic goddess who is the foremother of Freya and Frigg. She was a fertility goddess and was associated with domesticity, womanhood, and female sexuality. She was also associated with sorcery and magic, as well as war and death. It was said that after a battle, Freya would lead a band of Valkyries to gather the fallen warriors—or half of them, at least. She would take her share of the dead to Folkvang, her hall in the home of the gods, while the other half went to Odin, god of wisdom and war. Freya might also have been the goddess on hand to greet women after death. Freya’s chariot was pulled not by horses but by two male cats. Both cats were described as being blue or gray and had been a gift from Thor.  She is the archetype of the völva, a practitioner of seidr, the most organized form of Norse magic.

Mix Freya's syrup to taste with your balsamic vinegar for bread dipping or a base to any salad dressing.

Sweet with just a hint of fruit, I also appreciate the reusable packaging.

The first drop erased my capacity for rational thought. It’s absolutely sublime, turns homely oatmeal with pears into a magical treat, and is now a staple of my kitchen witchery.

Slathered our waffles with Freya! Heaven on earth

Purchased as a gift, packaged beautifully and received quickly. I hope she'll let me try some!

Everything from the packaging, the aesthetic, to the products themselves was stunning. The Vanilla/Fig Freya syrup has already become a family staple at breakfast time, and we've already placed our second order both for us and for family/friends.

This is one of my all-time favorite syrup flavors from WytchWood! It is so delicious and perfectly balanced, will definitely be keeping it in stock in my pantry!

This was the first syrup I tried from Wytchwood. I love this syrup in my chai tea! I'll definitely be trying more flavors soon! 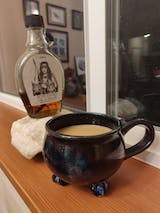 L
L.L.M.
I made the Love Bars using the Freya syrup!

Will try to send a picture. Didn’t work!!

S
S.
Legit have no idea where the grape bubblegum comment is coming from

K. Have no idea where the grape bubblegum flavor is coming from, to the point that I am annoyed someone would even leave that kind of review. Are we even talking about the same product here?? This syrup is AMAZING. It is a darker syrup, you can see that from just looking at it. And yes it is sweet. Fig and vanilla. You know it's going to be intense just from reading the name and description. Don't buy this expecting your everyday run of the mill, light, commercial, (high fructose corn syrup, not real maple syrup) junk syrups. This is the real thing. If you have never had real vermont maple syrup before you are in for a treat. I find this to be so potent, it is perfect for baking. It's quite potent, so if you want to use it on pancakes or waffles, a little goes a long way. Don't get this expecting that you are going to pour gobs of it on like you might with regular (not real) syrup. I can't say enough good things about all Wytchwood's syrups. I've had Circe, Freya, and the Samhain and they're all delicious, all potent and very intense. Again I remind you, don't get this expecting something like Log Cabin "maple syrup"!