WytchWood syrup starts with the sap from maple trees grown in Central Vermont. The sap is then boiled in the spring and infused with organic pumpkin spices and finished with a cinnamon stick. A cozy and warming syrup. Each bottle is hand wax-sealed, has a gold foil label which is beautifully illustrated by the talented artist Kristopher Martin of Arcane Path. It is then ritually blessed and the taste is unlike anything you have ever experienced. Each and every bottle is represented by a God, Goddess, Pagan celebration or folklore icon.

This syrup is great for:

The story for Samhain (pronounced Saa-wen):

Samhain starts on October 31st and is one of four main Gaelic festivals. Celtic belief says that on the night of All Hallows' Eve, the veil between ours and the spirit world is at its thinnest. The Dullahan, a dark Fae known as the Headless Horseman, crosses over and rides to the place where a person is due to die. When the horseman calls their name, they’ll immediately perish. He foretells death, but he has one weakness – gold. So use our bottle of liquid gold to ward him off!

Samhain is the ancient Irish festival that became Halloween as we know it and its because of these Irish roots that we have plenty of Halloween-worthy Irish legends and myths.

The Celts believed the year was divided into two parts, the lighter half in the summer and the darker half in the winter. Samhain, or Halloween as it is now called, was the division between these halves. The Celts believed that the veil between our world and the otherworld was thinnest at this time. Oíche Shamhna (October 31) is Halloween and Lá na Marbh (November 1) is the Day of the Dead, or All Saints Day when those who have passed away are remembered.

This syrup is beyond exceptional! I’ve used it to make craft cocktails, in teas, on cornbread and of course French toast! It’s unbelievable the plethora of things you can enjoy it with! I wish I had bought an extra bottle! (Try it as a sweetener for your Apple Alchemy tea)! YUM!! 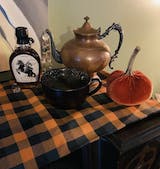 My favorite maple syrup! Nice and spicy. I put a little on my sweet potatoes, in my tea, on ice cream. Yummmm

This tastes exactly how you would expect! Perfectly spiced, yummy, delicious maple syrup! I personally taste the cinnamon more than the other spices, but the spices are not over-powering, it's balanced to perfection. I love it so much I bought another bottle!

This syrup tastes like real pumpkin and is perfect!!! I can get pumpkin-flavored spice anywhere but this is one of a kind. :)

Beyond words of deliousousness!! Yummm!!

I’ve tried this this in my coffee and also for my ritual offerings! It is absolutely delicious! Thank you!

I loved this maple syrup! It’s the perfect fall spice and not overwhelming. 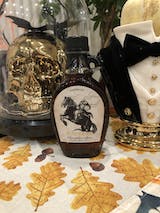 I never realized how good and how many foods and drinks I could use syrup with. I not only used it on pancakes, but also in oatmeal and tea. I'm looking forward to pairing syrup with other foods. I will definitely buy again. Your new fan. Maureen

This is my first WytchWood syrup purchase and I am so happy with it! The bottle is the perfect size and I love the wax seal on the top, such a nice touch! The consistency of it is perfect, not too thick but not too watery and the flavor is amazing! Perfect pumpkin spice but not too overwhelming. I'm sure this is delicious on pancakes but I've also been putting it on oatmeal, yogurt, toast, bananas and in my coffee and its all so good!

V
Valerie Crocco
It Goes on Everything!!!!