Our most requested maple syrup flavor is finally here!

WytchWood syrup starts with the sap from maple trees grown in Central Vermont. The sap is then boiled in the spring and infused with organic pomegranate puree. A sweet and delightfully fruity syrup. Each bottle is hand wax-sealed, has a gold foil label which is beautifully illustrated by the talented artist Kristopher Martin of Arcane Path. It is then ritually blessed and the taste is unlike anything you have ever experienced. Each and every bottle is represented by a God, Goddess, Pagan celebration, or folklore icon.

The story of Persephone, the sweet daughter of the Goddess Demeter who was kidnapped by Hades and later became the Queen of the Underworld, is known all over the world. The story goes that when Hermes reached the Underworld, he requested that Persephone come back to earth with him to rejoin her mother and father. Hades knew he could not refuse the commands of Zeus, but he also could not part from his beloved Persephone. Before she departed from the Underworld, Hades offered Persephone a pomegranate as a farewell. This was a cunning move by Hades. All the Olympians knew that if anyone ate or drank anything in the Underworld they would be destined to remain there for eternity. Thinking of her mother, Persephone decided to, instead, eat the small seeds of the pomegranate – assuming that these would not count as consumption. Little did Persephone know, this was exactly why Hades had given her the pomegranate. Because Hades had deceivingly tricked the young Persephone into eating the pomegranate, he was commanded to allow Persephone to visit her poor mother above his domain. In return, Zeus promised a binding deal that allowed Hades to have Persephone a month for each seed she had eaten. Thus, for half of each year, Persephone was to sit on the throne of the Underworld beside Hades. During Persephone’s six months on earth reunited with her mother, the land was fertile, beautiful, and warm. The meadows were lush and of the deepest green. The trees were tall, sturdy, and fruitful. The rains came often and drought was unseen. However, when Persephone left the land and entered Hades’ domain, the earth experienced a cold, dark period with no growth. Demeter grieved for her daughter and had little time to nurture the land. It is actually the way of the ancient Greeks to explain the change of the seasons, the eternal cycle of Nature's death and rebirth.

I love all things Persephone and pomegranate. I was interested to see how this would turn out since pomegranate infuse stuff can sometimes taste funky. But this is absolutely delicious. I hope they continue this line because I want to be able to buy this as often as possible. 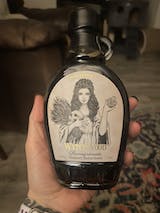 It's sweet but slightly savory as well. I love putting it in plain greek yogurt to really taste all the notes of it.

Normally when I get Pomegranate anything lately it's way too sweet but this flavor is perfect. I like it best on French toast rather than sweet pancakes or waffles. I haven't yet tried it in my coffee but I definitely will and update my review!

This was my first time ordering maple syrup from Wytchwood but it definetly won't be my last time . Get this seasonal delight while you still can . The syrup is so worth the price . I will probably never use supermarket syrups again . Treat your self and your loved ones to this gourmet syrup .

Can be used either sweet or savory. Rye french toast with roasted pumpkin seeds and pomegranate syrup - oh my gosh - so delicious!

This syrup is delicious. I also loved how thoughtfully the box was packaged. I'm trilled with my order and will definitely try other products!

I am BLOWN AWAY by the gorgeous art work on my bottles, I just want to collect them all! The syrups were packaged so nicely, with some maple candy and foliage leaves adding to the aesthetic. I absolutely will order again and again!

I love this syrup! Was looking forward to trying these and I’m definitely pleased with them. ❤️

So delish on toasted lemon poppy seed pound cake and the color of the syrup is lovely.