Cold winds were blustering outside my cozy home and I felt a need for a bit of a different hot drink to cozy up with. Rummaging around my tea and honey cupboard I found a single Spiced Cider tea bag...in a lovely mug I chose some Oak Bourbon Barrel Aged Odin Maple Syrup and simmered a brew of apple cider and water until it began to bubble and combined it with the syrup and spiced cider tea, stirring with a cinnamon stick!!! Sheer indulgence and pleasure with every sip!!! Ahhh, the possibilities for potions are endless. Love♥️🖤♥️

I’ve tried this on waffles, ice cream, and in coffee! It’s delicious beyond words, and I will absolutely have to purchase more when I run out!

E
E.
The best I’ve ever had

This is the best, richest, incredible tasting maple syrup I’ve ever had and that’s coming from a long line of Vermonters, who has relatives in the maple business 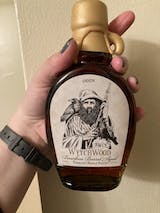 Got this as a stocking stuffer for my Man for Christmas and I was too excited so we cracked it open early lol. Flapjack Friday is a staple in our house and he's a Bourbon freak so I figured the best of both worlds. Absolutely DELICIOUS!! So good he asked if we could do pancakes every day...but I don't need the carbs lol! Amazing, spectacular and beautiful packaging. We will definitely be buying more!

B
B.R.
Best syrup ever

I am very impressed with the quality and complexity of the syrups.

First time ordering and trying this - it was absolutely delicious. Am sure I will buy again.

This one has been quite a tasty addition in meat glazes and BBQ sauces. We've also used it on pancakes, mixed into baked goods like muffins, or in a cup of morning coffee! The best part of waking up, is Odin in your cup (specifically on Wednesdays.) XD

This syrup is so tasty! And I love supporting small businesses with good people. Will definitely be ordering in the future.

A
A.
Delicious & High Quality

I purchased multiple syrups and some other products. They’re all wonderfully packaged and high quality. The most delicious syrups I’ve had, and I love the unique flavor options.