We introduce to you our Maine Cranberry flavor as the Celtic Goddess of Death and Battle - The Morrigan!

One of the most prominent aspects of the Morrígan was her nature as a triple goddess of war. In many stories, she appeared as both an individual and as three goddesses acting under a single name.

It is without doubt that the Morrigan is one of the most powerful female figures in history and the fiercest Goddess is Celtic myth. Use this dark red syrup in ritual as a libation where aggression, force and crushing victory is needed. It can also be offered to shift ones shape, for shadow work or powerful sex magic.

For the Kitchen Witch, this syrup is great on or with:

This is my favorite Wytchwood syrup. It’s simultaneously sweet and tart and adds a unique taste to goat cheese and brie.

I have tried this on everything that is sweet for brunch to savory dinner items. From pancakes, to waffles, to french toast to chicken to potstickers to meatballs. This is a versatile little syrup that really is magickal. I love it!

J
Jennifer
I love the name of the syrupy

I love how the Morrigan is bottled and the story on the back. Plus it is delicious too . 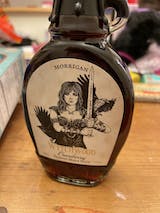 Love the name, love the taste!

This syrup is tart and sweet in perfect balance. It’s delicious on everything and anything you can think of.

A
Alexa Ayer
Perfect on yogurt!

We have a collection of syrups and this is our favorite on yogurt with dried cranberries!

If you’re looking for a unique and tasty and very FUN gift to surprise someone with…just take a leap into WytchWood Land, and let Christina & Ben take over for you…..Thank You so very much from a very loyal customer. Joan

So far my favorite of Wytchwood’s offerings. This delicious cranberry maple syrup goes well on everything from grilled meats and cheeses to sweets and drinks. I especially love using it in my morning oatmeal with apples and chopped nuts or on slow roasted herbed poultry dishes during the colder months.

I wasn't sure what to expect and thought, why not give it a try? I was not disappointed - a wonderful paring. I've used it on everything and as a sugar substitute in recipes. Yummilicious!