WytchWood syrup starts with the sap from maple trees grown in central Vermont. The sap is then boiled in the Spring and infused with organic fig and finished with a vanilla bean. A sweet, creamy and fruity syrup. Each bottle is hand wax-sealed, blessed and unlike anything you have ever experienced. Each and every bottle is represented by a God, Goddess, Pagan celebration or folklore icon.

Freya is one of the preeminent goddesses in Norse mythology. She’s a member of the Vanir tribe of deities, but became an honorary member of the Aesir gods after the Aesir-Vanir War. The word for “Friday” in Germanic languages is named after Frija,the Proto-Germanic goddess who is the foremother of Freya and Frigg. She was a fertility goddess and was associated with domesticity, womanhood, and female sexuality. She was also associated with sorcery and magic, as well as war and death. It was said that after a battle, Freya would lead a band of Valkyries to gather the fallen warriors—or half of them, at least. She would take her share of the dead to Folkvang, her hall in the home of the gods, while the other half went to Odin, god of wisdom and war. Freya might also have been the goddess on hand to greet women after death. Freya’s chariot was pulled not by horses but by two male cats. Both cats were described as being blue or gray and had been a gift from Thor.  She is the archetype of the völva, a practitioner of seidr, the most organized form of Norse magic.

Mix Freya's syrup to taste with your balsamic vinegar for bread dipping or a base to any salad dressing.

I haven’t opened these 2 yet but I’m sure they will as awesome as the other flavored I’ve tried. My favorite being Circe lavender and lemon, pure magic.

I usually gift my wytchwood syrups but this one I kept! And it’s fantastic! I use very sparing amounts of syrup on breakfast items, but the glorious frangrance and soft flavoring of this made it a NECESSARY addition to breakfast meals. This has also been fantastic final touch on beet & goat cheese salads 😍 obsessed!

Honestly I was curious about the fig flavor but it’s so good. It’s a nice light flavor. 10/10 recommend. 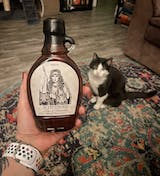 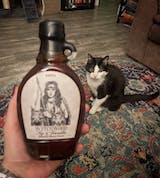 This flavor is so unique and absolutely delicious! I have used it to flavor tea, and on pancakes, as well as in recipes for baked goods.

This went wonderfully on yogurt mixed with cranberries!

We like it but it is a little bit strong for me. I really love the caramel and the strawberry specially mixed together.

My friend, after 40+ years, has learned he does like home made waffles. So I treated him to banana waffles this morning. The Freya syrup paired so well with the banana, clove, cinnamon, and nutmeg. It was one of best palate pleasers I've ever experienced. I'm looking forward to trying the others now. This would also make a fantastic gift for those you want to impress.

I've tried most of WytchWood's syrups but hadn't gotten to this one yet. So glad I finally ordered! Its veeery sweet but not in a chemically, sticky way. Figs are nature's candy and the just adds to it! absolutely love!

Sweet with just a hint of fruit, I also appreciate the reusable packaging.