This is my third bottle. It's amazing. Tastes like spices and maple and gingerbread without any flavor overpowering the others. Will definitely keep purchasing!

Pour a trail towards Baba Yaga's hearth and I'll follow it without question! Amazing on pancakes and delicious in coffee and tea! Dip churros or waffle sticks in this syrup as well! You won't regret it!! 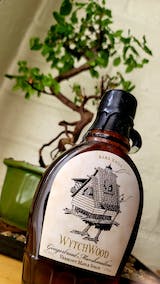 This syrup goes above and beyond...again. Every time I order from this wonderful shop I am left astounded. The maple syrups are to die for, whether that be in my tea or used as a cocktail addition or even for desserts. The best dang maple syrup I've ever had. Will be a lifelong customer for sure.

Not only is this syrup delicious on pancakes and waffles, but it is AMAZING in coffee and tea!! Definitely will be buying again!

I really like this syrup! The flavors are subtle yet unmistakable. They give my buttermilk pancakes a real zing.

My best friend has wanted this forever and was absolutely delighted. The wax seal was gorgeous and it arrived so fast.

K
Kimberlee
My Favorite! (Don’t tell the others)

This is my favorite flavor that I’ve tried thus far! The perfect amount of gingerbread spices and sweetness. It goes great in coffee, on pancakes, in cocktails...you name it!