Our best-selling nut-free, organic oil is comprised of grapeseed and sunflower to give you great moisture during the colder months. This blend smells like Samhain in a bottle. It has an earthy, spicy yet romantic, and cozy scent. We used essential oils cinnamon, rose & patchouli with paraben-free black tea fragrance. Because of cinnamon oil, we do not recommend it for the face.

This is perfect for retrospection, ancestral work, and grounding. You can put it on the body, in the bath as a candle anointing oil.  Inside you will also find small black obsidian crystals to help stir up the magical black shimmer of this oil.

The story for Samhain (pronounced Saa-wen):

Samhain starts on October 31st and is one of four main Gaelic festivals. Celtic belief says that on the night of All Hallows' Eve, the veil between ours and the spirit world is at its thinnest. The Dullahan, a dark Fae known as the Headless Horseman, crosses over and rides to the place where a person is due to die. When the horseman calls their name, they’ll immediately perish. He foretells death, but he has one weakness – gold. So use our bottle of liquid gold to ward him off!

Samhain is the ancient Irish festival that became Halloween as we know it and its because of these Irish roots that we have plenty of Halloween-worthy Irish legends and myths.

The Celts believed the year was divided into two parts, the lighter half in the summer and the darker half in the winter. Samhain, or Halloween as it is now called, was the division between these halves. The Celts believed that the veil between our world and the otherworld was the thinnest at this time. Oíche Shamhna (October 31) is Halloween and Lá na Marbh (November 1) is the Day of the Dead, or All Saints Day when those who have passed away are remembered.

Like usual this company didn't let me down! The scent is absolutely beautiful, I'm gonna compare it to those scented brooms or pinecones the craft stores get during the holidays. The color is gorgeous, and the artwork is awesome!
I like to put this one in my hair after I straighten it to smooth it out a bit especially since there is a little bit of a black tint to it.

The Scent of this product is mystical and deep, it’s spicy and clean at the same Time! The moment I put it on, I was transported to the deep woods around a bonfire of birch and cinnamon with clean aromas of timeless patchouli with just the slightest sweetness of floral. My significant other said it’s one of my better scents! Grab it while you can! A little goes a long way! 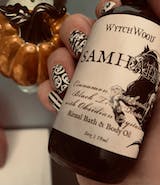